Ever since it's founding in the 1960s, this restaurant has bastioned is tradition of Filipino-Cantonese cooking. Located in the Great Eastern Hotel, the hote
No comments: 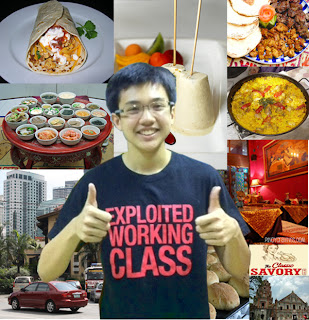 Burgos in a sense is an undiscovered wilderness rich with cultural traditions waiting to be found. Thus as the tour guides, we will be portrayed as the pioneers or explorers who will show you the path to these discoveries waiting to be revealed. After all , no one has fully learned about Makati's glorious history or the dedicated processes of making chorizo and pandesal, among others. We guarantee you will not forget this memorable experience! So explorers, ready yourselves to be immersed in food, culture and history.
No comments: 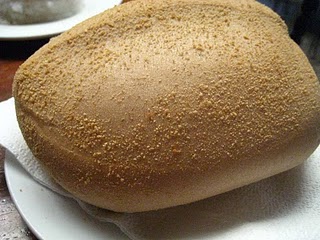 According to residents, this small bakery serves the best pandesal bread in Makati. Located alongside a busy road artery, the bakery specializes in traditional breads such as pre-war pandesal and old style American bread. All procedures are done traditionally with methods dating back decades. This includes the way bread is baked with use of firewood instead of coal or electricity; this undoubtedly gives the bread a unique smokey and fresh flavor. Also, the bread is made with all natural ingredients without any additives and preservatives whatsoever. In fact the delightful sweetness found in the bread comes from brown sugar, instead of artificial sweeteners.
Distinctly being one of the only places to preserve traditional baking methods, the place has become very popular ever since, both for it's unique taste and historic background. In fact if you're to enter the store at any time in the morning, it's not easy to miss a pile of firewood seven feet high. Amazingly it all disappears in the afternoon!
No comments: 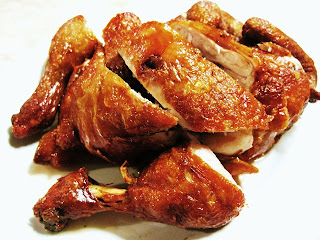 Directly next to the bakery is a restaurant that serves a uniquely different version of Chinese Fried Chicken. In fact the food has been coined "so delicious" among customers, that they have promoted it to be one of the few distinctive foods visitors must try whenever they go to Manila. The dish is composed of a chicken being initially dipped in a marinade of secret herbs and then fried to perfection. According everyday customers, the taste of the dish has a stronger aroma than other fried chickens. The marinade itself penetrates the most interior parts of the bird like the dry breast meat which one may commonly associate with of as being bland. A major distinction is the fact that the chicken skin is crispy all over. Many people dislike getting skin and meat from the bottom of the bird because it is usually soft and greasy. However, when it comes to savory chicken, almost every part of the bird is crispy, without any oil! The overall taste of the secret herb concoction has no reasonable explanation to describe, but one thing's for sure, the strong aroma will leave you yearning for more.
No comments:

A more atypical way to immerse one's self to Korean cuisine, this quaint spot is one of the only few places among the numerous Korean restaurants across Manila to serve sundae. Most of individuals familiarize sundae as being that of a sweet ice cream desert, however Korean sundae take this name to a whole different spectrum of food. Across Korea, sundae is thought of not as an ice cream but a savory type meal made of pig or cow's innards, blood, vermicelli, and barley. Originally, sundae was created as more a remedy during famished times in pre-modern Korea when meat was scarce during the hostile winters. The blood and barley actually were used as extenders to make the sausage-like dish taste like meat. However in the present world, sundae has evolved to become one of Korea's most sought after delicacies instead of being a poor man's meal with pauperized connotations. As a matter of fact, sundae has gained the recognition of food lovers and gourmets across Manila. With a filling and slightly spicy sensation, sundae is considered to be worth trying among food enthusiasts. There is actually no any taste of "lamang loob" at all! Even famous chef Gene Gonzales himself said that it was one of the best things he's ever tasted.
No comments: 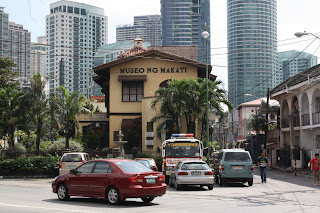 Featuring a glimpse of Makati's historic past, the Makati museum houses artifacts, dioramas, and old photos of the city during and before the 20th century. The museum building itself is a piece of history as it was Makati's first town hall during the turn of the century.
No comments:

Castillian and other Spanish delights 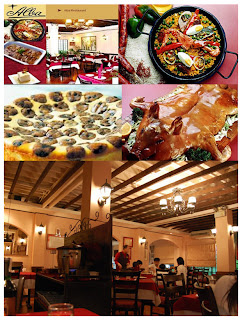 Known for it's amazing paella and other Spanish dishes, this restaurant has been given the distinction of being one of the best Spanish restaurants in the Philippines. Don Anastacio de Alba, the founder, has been spending the past fifty years in the Philippines establishing Spanish restaurants and spreading Spanish culture. Having been an intrepid gourmet himself, Alba used to work in Madrid's best restaurants. However the outbreak of the Spanish civil war displaced his dreams. However, he sought to relinquish them during his arrival in Manila in the 1950s.  As a testament to his none stop efforts over the years, Alba has been given the title as King of Spanish cuisine in the Philippines and has even won an award from the king of Spain himself who, among other VIPS, have dined at his restaurant.
Specialties in this place include Lechon de leche, callos, paella, and lengua(tongue). Most of the meats in this restaurant are tender and filling. The Lechon de leche is one exception every person must try when he/she goes here as the meat and fat actually melts the mouth! Other products worth trying or taking home are Spanish chorizo and Morcilla (blood sausage) that both go really well with eggs.
No comments: